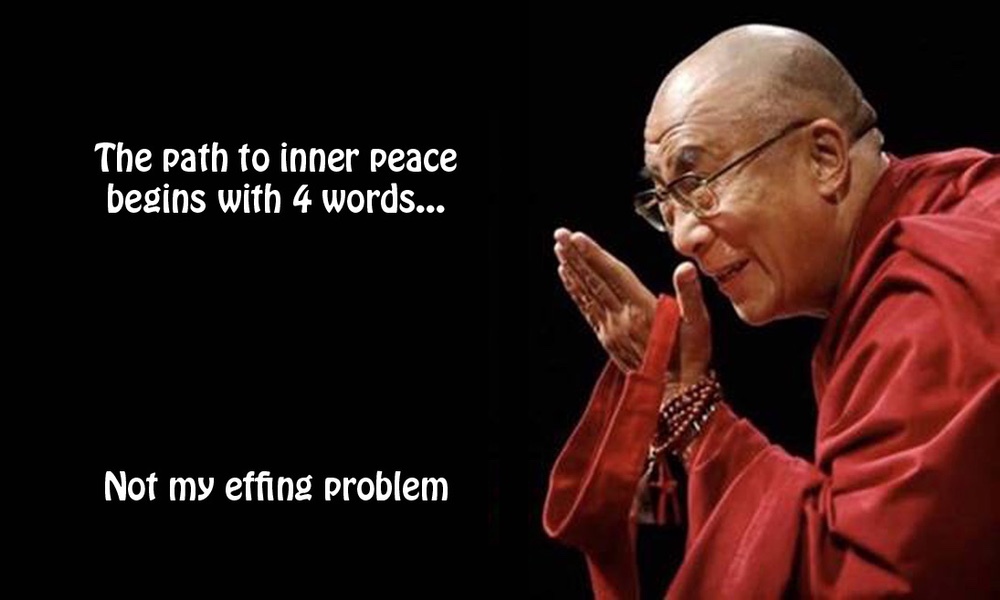 Minding Our Own Business

I'm pretty sure that the Dalai Lama quote is fake, but it's still true. "Not my effing problem" can lead not only to inner peace, but also to social peace.

Think for a moment about what it means to see everything in the world as "our problem."

First, it's incredibly conceited. It implies that we know better than everyone else what's good for them and their societies. We are the smart ones and they are the dummies. In fact, we are so much smarter than they are that we have a right to force them to live as we think they should.

It also implies that we're immensely powerful and have unlimited resources. If there's a problem anywhere in the world, we not only know how to fix it, but we have the ability to fix it. The people whose lives and societies we "fix" should just shut up and do what we tell them. Then everything will be just fine.

It starts to sound like we think we're God, since we're responsible for the entire world and we have authority over it.

But we're not God. We are people with limited knowledge, limited resources, and imperfect morality. We can't fix every problem, nor do we have the right to do it.

And that leads to point two: it's impractical for us to think we can fix everything. Finite creatures like us simply cannot do it. We can't spend our lives running around the country or the world trying to "solve" what we think are problems by forcing our beliefs on people who don't consider them problems.

If we do try to fix everything and force everyone else to obey, then only two things are guaranteed:

In the words of British author C.S. Lewis:

"Of all tyrannies, a tyranny sincerely exercised for the good of its victims may be the most oppressive ... those who torment us for our own good will torment us without end for they do so with the approval of their own conscience."

Let's not torment each other. Some things that other people do are none of our business, even if we think they're wrong.

Obviously, there are exceptions. But the default should be for us to leave other people alone to live their lives as they see fit. The result will be imperfect, but we and other people will be happier, while society and the world will be more peaceful and livable.